EUGENE SEAGRIFF SHOWCASED ON THE STRIP LIVE FOR VEGASNET TV

In this interview, Eugene Seagriff shares the six steps to his signature Biz Pro Blueprint and what you may be missing out on if you are not following a proven business success system.

[BEGINNING OF TRANSCRIPT] [Maria Ngo] And we’re on the red carpet with Eugene Seagriff. Now he is a business growth and repair strategist and what that means is every business owner who wants to make money needs to talk to him because he helps you make money. Now what business owner doesn’t want to talk to you? [Eugene Seagriff] Everybody wants to talk to me, right? [Maria Ngo] Well, I know that you’ve worked with some massive companies like Samsung… So tell me a little bit about your background and what you’ve done in the past? [Eugene Seagriff] Well thanks. Yes, I’ve had a great, great time doing lots of good things for example at Samsung, I had the opportunity to train marketing directors from Europe and Asia and Central and South America, Panasonic. I’ve trained product developers and designers on user interface best practices. I had the opportunity to represent the Telecommunications Industry Association on FCC advisory panel and things like that. So lots of great stuff, lots of fun. And somewhere along the way I’ve helped deliver over three billion dollars in that sales. [Maria Ngo] What!? Three billion dollars. Is that with the “B”? [Eugene Seagriff] With a “B”. Big “B”. [Maria Ngo] Okay, so how much of that did you get? Oh, we can’t, we can’t talk about that right? Okay, okay, I’ll back off… But in the process of learning everything that you learned from those big companies and you are now helping small businesses really grow their businesses and you’ve
developed what’s called a “Product Profit Blueprint.” You all try saying that three times faster, right? So there’s actually six steps. So let’s go through this really quickly and I know we’re here on the red carpet so let’s make it fun and get people really energized because you know what you guys get your pen and pencil or whatever out and start taking notes. So six steps and here we go… [Eugene Seagriff] Yes and I’m kinda on a mission about this, right? Because 70% of businesses fail, doesn’t have to be that way. Right? If they knew what I knew it wouldn’t be that way. So I developed this Blueprint and they don’t know what’s in that stuff. Step 1 is you got to decide where and how you gonna compete. You’re in control of that. Take it. Own it. Live it. Step 2 is make sure you can make money. This is often overlooked not out of neglect but more because people can’t really anticipate cost well enough and they, they don’t understand the businesses that they’re in deeply enough and they get into trouble with money. That’s problem. Step 3 is get the product made right. And by made right, I mean quickly and cost-effectively. And there’s lots of great tools out there now that make that really easy. Step 4 is tell your story effectively and that has to two parts to it: One is make it really relevant to the person that you know you’re trying to serve with your product and the second is make sure you get the most of every dollar you spend in advertising, right? Make it targeted. Make it efficient. Make it measurable. And keep iterating until it
gets to the point where you know the customers can’t stay away. I have a step… Where are we now? Get the product sold. [Maria Ngo] Oh! yeah. [Eugene Seagriff] You need to, you need to have your, your channel whether it’s online or multi-level marketing or through traditional channels. You gotta know the rules of the channel. You gotta know the cost of the channel. And you got to make that all happen. Put it together. And then last but not the least: You got to set up the system so that your business can scale and grow without throwing a whole lot of bodies on it. [Maria Ngo] Right on, well I know that people can get that Blueprint. If you want to get the actual steps, you can actually look down at this website and get the Blueprints. So go ahead and get that. So I like to close and with your message to everybody out there who has a business. What was it that you want to say to them in order for them to have a successful and profitable, keyword “profitable” business? [Eugene Seagriff] “Profit is king.” Casually, it’s even “kinger.” [Maria Ngo]”Kinger”? [Eugene Seagriff] Yes, yes. It’s a new word. But seriously, most people still think that the most features that the lowest price wins, but in reality it’s the most relevant story to the target market that wins. [Maria Ngo] Right on. Well, thank you so much for being on the red carpet and sharing your nuggets of information and wisdom. Thank you so much. So go to the website. Get the blueprint. We’ll see you next time. [END OF TRANSCRIPT] 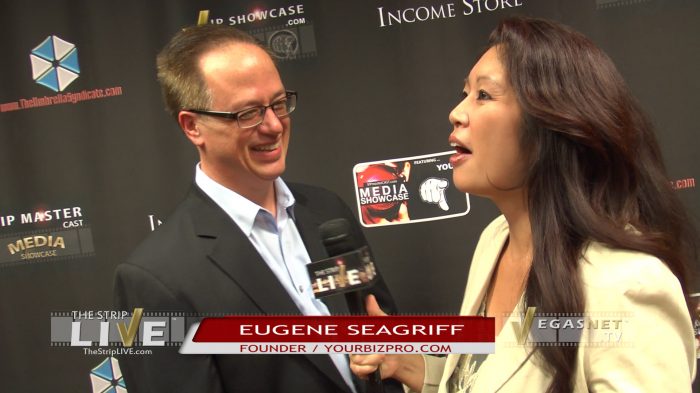 - Founded Your Biz Pro to provide the knowledge people need to succeed in The Entrepreneur Economy. Visit: YourBizPro.com