AARON YOUNG SHOWCASED ON THE STRIP LIVE FOR VEGASNET MEDIA

In this interview, Aaron Young discusses how The UnShackled Owner program is freeing business owners from self-imposed prisons to have more profit, happiness, and time.

[BEGINNING OF TRANSCRIPT] [Maria Ngo] And we’re back on the red carpet with Aaron Young who is a lifetime successful entrepreneur who’s built up several companies in a multi-million-dollar range. He’s also a professional speaker. He is a Chairman of Laughlin Associates and just a phenomenal individual. Thank you so much for being here Aaron. [Aaron Young] Oh my gosh! It’s great to be here with you Maria. I really glad to be here. [Maria Ngo] So you are currently working on a new project called ‘The Unshackled Owner’. [Aaron Young] Yeah. [Maria Ngo] Tell me about that. What’s that about? [Aaron Young] ‘The Unshackled Owner’ is basically the exact formula, the exact recipe to help business owners build a business that can not only make a lot of money and make a lot of impact but to give them the time and the freedom to do what they’re great at, not get stuck doing lots of work that they hate doing. So many business owners start off with a great idea. They’re doing what they’re really awesome at. But they end up getting involved with like, you know the financial side, or the HR side and they go away from what they’re geniuses and then they get kind of stuck in this prison of the business. So the whole idea is that, ‘How do you get out of that.’ [Maria Ngo] So why did you decide to create something like this? Now I can totally relate to what you’re saying but why did you create it this? [Aaron Young] Well… So a few years ago, I got pulled into some litigation. That was regarding another company that we’d been doing business with. And they said that I either knew or should have known what these guys are up to and anyway we fought on but we lost and I ended up going to prison myself for fourteen months and it was really bad because you know, during that time, I missed an anniversary. I missed my kids’ birthdays. I missed Christmas and Thanksgiving and the little league games and all that stuff that comes with life. Now, personally I have time to reflect and I thought, ‘How many of my business owner friends are missing that little league game, the football game, the dance recital and so on because they’re not locked up, but they’ve created a prison for themselves. And I knew there was a way that I’d been able to do in my companies where somebody can have freedom to run a business and do at they’re great up but not be a slave to their desk and have to be at the office sixty, eighty hours a week. And so, I built this program really to give people their life back. [Maria Ngo] So tell me, if there is one thing that you can say to that person who’s feeling bogged down, being shackled to their business, what is the first step do you think that they should take to start thinking about moving, becoming unshackled? [Aaron Young] Well, okay, first thing is: It’s very difficult to read the label from inside the bottle. So in other words, we have a hard time seeing where we’re kind of missing out. So I guess the first thing is, if you’re feeling conscious of the fact that you’re stranded and anybody that’s listening to this, you’re going to know if you are not. Decide that you’re going to learn something different. Do something different. Figure out a way to engage with your employees in a different way and start getting real, intentional about what you want and it’s amazing how that path can line up. Now, we’ve come up with a way that is a specific formula for it but, the main thing I want people to know is that they don’t have to stay where they are. There’s a way little differently but you have to have the courage to admit it and want to try some you know, experiment on some new things. [Maria Ngo] Right on. So for people who want to get more information, learn about your programs, learn more about how to become ‘unshackled’, where should they go? [Aaron Young] Oh! You can go just… It’s my name, Aaron Scott Young – aaronscottyoung.com. Go there and you know what’s cool? If they go, when they go to that that website, right at the very top of something called ‘THE FREEDOM FORMULA’ and you just get it for free and it’s basically everything that I teach people to do and it’s just there and a little cheat thing. Look at it and it’ll give them the steps and they can go to work. [Maria Ngo] Well thank you so much for being here and doing what you do and being here on the red carpet today. [Aaron Young] It’s always great to be here with you. [Maria Ngo] Thanks. [Aaron Young] Bye. [END OF TRANSCRIPT] 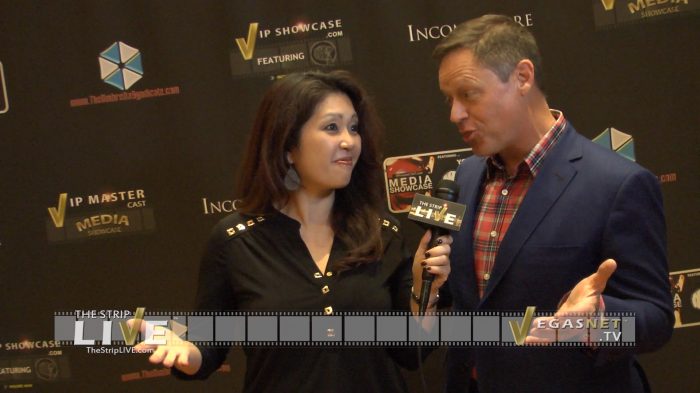 Aaron Young, is a lifelong entrepreneur, trusted advisor to CEOs and business owners and creator of The Unshackled Owner a program for entrepreneurs looking to build a business and not just a glorified job.

Aaron is Chairman/CEO of Laughlin Associates, a 44-year-old company that has helped over 100,000 entrepreneurs start, grow and profit from their business. This has given Aaron an ideal vantage point to observe common mistakes and successes in businesses from Main Street to America’s largest yacht broker from medical professionals to manufacturers to investors. For over 34 years, his experience founding, acquiring and directing multi-million dollar businesses as well as working as an officer for a publicly traded, multi-national, sets him apart from the crowd as a voice of real world knowledge and authority.

Aaron has made it his life’s work to arm other business owners with success formulas that immediately provide exponential growth and protection.

Maria Ngo and Ray DuGray are the happily married hosts and executive producers of a celebrity talk show based in Las Vegas called THE STRIP LIVE, founders of VegasNET Media LLC and creators of VegasNETmedia.com and VipNETmedia.com where they feature interviews with some of the world’s most successful and influential people.

Maria and Ray's passion and expertise is in the field of CELEBRITY POSITIONING. Specifically, using proven strategies to position authors, speakers, trainers, coaches, consultants, marketers, service professionals, entertainers and entrepreneurs as leading authorities and credible experts in their industry.

Learn more about working directly with Maria and Ray at VIPshowcase.com and AuthorityShowcase.com. You may also watch their live and on-demand webinars and webcasts at VIPmasterCAST.com.

THE STRIP LIVE (and MASTERCAST LIVE)

Based in Las Vegas, THE STRIP LIVE is a positive, unconventional celebrity talk show broadcasting globally on VegasNET TV (including 10 niche OTT channels) along with dozens of online distribution partner sites and social media networks.

Their spin-off show (MASTERCAST LIVE) serves a global audience of "success seekers" and showcases some of the world's most successful and influential people.

Join Maria Ngo and Ray DuGray on the red carpet, backstage, on stage, in studio, behind-the-scenes at live events, and on location having fun (whether in a helicopter, green room or aboard a high-speed roller-coaster).

Learn more about THE STRIP LIVE and watch celebrity interviews online at TheStripLive.com and MASTERCAST LIVE at MasterCastLive.com.

A Las Vegas based media company and home of THE STRIP LIVE celebrity talk show and it's spin-off show MASTERCAST LIVE broadcasting globally live and on-demand 24/7 on VegasNET TV and VipNET TV along with online distribution partner sites.